While Gus served on the city commission he advocated for the creation of a Veterans Advisory Board.  With the help of others, the board was created with the intent of improving the lives of veterans.  For more information click on the link: www.myharlingen.us

​While Gus served on the city commission he advocated for the funding of the Veterans Memorial at Pendleton Park in Harlingen. In 2011 at the request of the city commission, the City of Harlingen 4B Board agreed to fund the total estimated cost of the new memorial in the amount of $593,000. For more information click on the link:  www.harlingenveterans.com ​

According to justiceforvets.org, because of the increasing number of veterans around the nation appearing in Drug Court and Mental Health Dockets, the first Veterans Treatment Court was founded by the Honorable Robert Russell in Buffalo, New York in January of 2008.  As of June 30, 2012 there were 104 Veterans Treatment Courts in our country with hundreds more in the planning stages.  As such, Cameron County founded its first ever Veteran Treatment Court in January of 2014.  Since that date, Gus was selected to advocate for veterans as the first ever Cameron County Veterans Court Public Defender.  For more information click on the link or the blue box:  www.justiceforvets.org

After being honorably discharged, Gus continues to be an advocate for veterans. 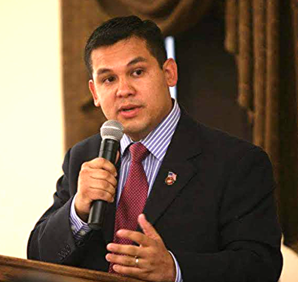